HAMILTON, Bermuda, July 27, 2021 /PRNewswire/ — DEWAR’S® Scotch Whisky, the world’s most awarded blended Scotch whisky, announces the launch of DEWAR’S Japanese Smooth which harmoniously brings together the best of two whisky making cultures and traditions from Scotland and Japan in a single bottle. This latest edition of the Dewar’s Cask Series features DEWAR’S 8-year-old double-aged Scotch whisky which is then finished in Japanese Mizunara Oak casks for six months. The resulting whisky is unique and features subtle floral honey and heather notes along with complex sandalwood aromas on the nose followed by cinnamon spice on the palette – a result of the porous qualities of the rare 200-year old Mizunara oak tree variety, also known as the «water oak», which is used for the Dewar’s cask finish. 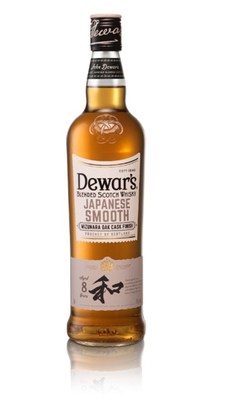 «The guiding principles in the creation of this whisky were balance and smoothness. This Mizunara finish enhances the signature Dewar’s heathery floral honeyed notes whilst subtlety imparting complex woody notes of sandalwood and cinnamon spice. It is an indulgent and pleasurable whisky with a rare breadth and depth of complex and subtle flavors. The smooth yet full-bodied finish makes it perfect to enjoy neat, on the rocks, or in a classic Japanese style highball,» says Stephanie Macleod, Master Blender for DEWAR‘S.

«We are thrilled to launch DEWAR’S Japanese Smooth but unlike previous iterations of our Cask Series it will be a permanent addition to our award winning range of whiskies. We believe this is too good a whisky to keep it to a ‘Limited Edition’ issue and thus far the world’s leading whisky connoisseurs would seem to concur: Dewar’s Japanese Smooth has consistently garnered 91-point ratings including from Mark Gillespie’s Whisky Cast, F. Paul Pacult’s Spirit Journal and Whisky Advocate magazine. Ratings are not the be all or end all of whisky quality, but when there is this consistent high level of recognition from objective 3rd parties it is a real sign that once again Stephanie Macleod has mastered her craft to reveal the exciting possibilities of blended Scotch whisky,» adds Brian Cox, Vice President, DEWAR‘S Scotch Whisky, North America.

Method: Add whisky to chilled highball glass filled with ice spears. Stir and gently top with chilled soda water. Place a bar spoon under the ice and stir a few times, being careful not to over stir. Spray with the aromatic oil of the orange twist, and garnish.

About DEWAR’S
Founded in 1846 by John Dewar, DEWAR’S has grown from a small wine and spirits merchant shop in Scotland, to one of the largest Scotch whisky brands in the world. Best known for its iconic DEWAR’S WHITE LABEL, it has expanded its family to create a portfolio of premium and super premium whiskies including DEWAR’S 12-Year-Old, DEWAR’S 15-Year-Old, DEWAR’S 18-Year-Old, DEWAR’S Double Double Series , and the exclusive DEWAR’S 25 years old. Most recently, DEWAR’s introduced its blended Scotch Cask-finished Innovation Series which harmoniously brings together two cultures for a uniquely richer taste and experience, with DEWAR’S Caribbean Smooth the first edition, followed by DEWAR’S Ilegal Smooth, DEWAR’S Portuguese Smooth and DEWAR’S Japanese Smooth. These whiskies are crafted using the DEWAR’S oak marrying ageing process, which involves returning the hand-crafted blend to vintage oak casks for further maturation and in cask blending or marrying. The result is a smoother texture and mouthfeel with a long, lingering finish; a highly pleasurable taste that wins followers the world over, making DEWAR’S the world’s most awarded blended Scotch. The DEWAR’S brand is part of the portfolio of Bacardi Limited, headquartered in Hamilton, Bermuda. Bacardi Limited refers to the Bacardi group of companies, including Bacardi International Limited.

Founded more than 158 years ago, in Santiago de Cuba on February 4, 1862, family-owned Bacardi currently employs nearly 7,000, operates more than 20 production facilities, including bottling, distilling and manufacturing sites in 11 countries, and sells its brands in more than 170 countries. Bacardi Limited refers to the Bacardi group of companies, including Bacardi International Limited. Visit www.bacardilimited.com or follow @BacardiLimited.

Honduras President at UN proposes reforms to the WHO system