BUDAPEST, Hungary, Oct. 15, 2021 /PRNewswire/ — Between 2-5 October 2021, during the 34th Annual Meeting of the
European College of Neuropsychopharmacology (ECNP) new data on the novel antipsychotic medication, cariprazine, was presented by Gedeon Richter Plc. According to the analyses, cariprazine was well tolerated and neither diminished effectiveness nor negative drug-drug interaction was present in case of patients who were taking hormonal oral contraceptives. Furthermore, cariprazine was also found to be efficacious in residual schizophrenia patients in a post-hoc analysis, indicating that it is a viable treatment option for chronic subpopulation as well. 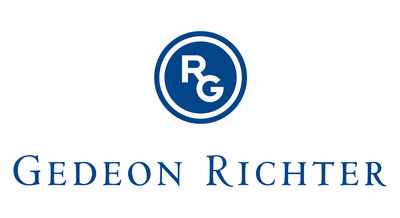 Schizophrenia is a chronic psychiatric disorder characterized by positive, negative, cognitive, and affective symptoms, and affects about 1% of the population. In case of schizophrenia, the first line of treatment is antipsychotic medication. While many of these medications are proved to be effective in treating positive symptoms, the management of negative and cognitive symptoms often remains a challenge. Furthermore, especially in case of typical antipsychotics, there are considerable side effects that hinder the quality of life.

Based on a drug-drug interaction clinical trial, it was shown that cariprazine has no meaningful effect on the pharmacokinetics of oral contraceptives and thus these can still be considered an adequate method of contraception during cariprazine treatment.

Furthermore, evidence was also provided that cariprazine might be a good treatment option for patients with residual schizophrenia based on the results of a post-hoc analysis of a 26 week, international, randomized, double blind, active controlled, fixed flexible dose trial.

The scientific posters are available through the website of GR.

Cariprazine, a potent dopamine D3/D2 receptor partial agonist with preferential binding to D3 receptors, is approved in the EU for the treatment of schizophrenia in adults under the brand name Reagila® and in the US for the treatment of schizophrenia and manic, mixed, or depressive episodes associated with bipolar I disorder under the brand name Vraylar®. Additionally, cariprazine is being investigated as an adjunctive treatment for major depressive disorder in adults. Cariprazine protected by a composition-of-matter patent that expires in 2029. Cariprazine was discovered by Gedeon Richter Plc. and is licensed to AbbVie in America and to Recordati in WEU.