LOS ANGELES and MEXICO CITY, Sept. 13, 2021 /PRNewswire/ — As concerts are returning around the world, Live Nation Entertainment (NYSE: LYV), the world’s leading live entertainment company, has agreed to proceed with its previously announced acquisition of a 51% controlling interest in OCESA Entretenimiento, a leading promoter in Latin America and owner of Ticketmaster Mexico from CIE (BMV: CIE), a prominent player in the live entertainment industry in Latin America, and Grupo Televisa (NYSE: TV), the largest multimedia company in the Spanish-speaking world, for an aggregate purchase price of MXN$8,835,000,000 or approximately USD$444 million based on September 10th closing exchange rate of 19.89, 7% of which will be held back and retained by Live Nation to cover operating losses, if any, for a period of time following closing. The acquisition, previously announced in July of 2019, was paused due to the pandemic, and is now expected to close by late 2021 or early 2022. The deal is subject to regulatory approval, which was previously granted during prior negotiations and must be confirmed once again now that the deal is proceeding. The move furthers Live Nation’s goal of building its global live entertainment platform, allowing the company to better service artists who now travel the world to play to their expanding global fan base. 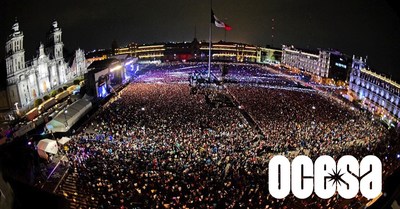 One of the most prominent live events businesses globally, OCESA promotes more than 3,100 events for nearly 6 million fans in a typical year across Mexico and Colombia and has a robust business portfolio in ticketing, sponsorship, food & beverage, merchandise, and venue operation with 13 premier venues across Mexico with a collective capacity of nearly 250,000 seats. OCESA promotes concerts for some of the largest artists in the world including Coldplay, Paul McCartney, and U2 as well as some of the largest festivals in Latin America like Corona Capital, Pal Norte, and EDC Mexico, the latter of which they are a core partner in alongside Insomniac, a subsidiary of Live Nation. As Mexico reopens, OCESA remains in a great position to resume concerts and festivals, and the company has a strong calendar of events for the remainder of the year. OCESA’s primary ticketing business, Ticketmaster Mexico, is a leading ticketing company in Mexico, with around 20 million tickets sold annually. As part of the transaction, Live Nation also acquired an interest in OcesaSeitrack, OCESA’s booking and artist management joint venture; ICREA, one of Mexico’s special and corporate event specialists; and Centro Citibanamex, an exhibition and convention center in Mexico City.

Live Nation is continuing to build on the momentum for the return to live events with ticket sales and concert attendance pacing ahead of expectations. In August, 8 million fans attended Live Nation events, and September is on pace to reach similar attendance levels. Additionally, the concerts pipeline for 2022 is up double digits from 2019, with touring plans extending into 2023 and 2024. The company also has vaccine and testing protocols in place for events in many regions including the United States, United Kingdom and Canada.

«After serving as Live Nation’s touring, festival, and ticketing partner in Mexico for years, we know OCESA is a stellar business with deep roots in live entertainment in Mexico,» said Michael Rapino, President and CEO, Live Nation Entertainment. «Alex has built a remarkable company and as we continue to build on the return to live, OCESA will play a pivotal role in putting together many incredible shows in Mexico and the rest of Latin America.»

«We are extremely proud to finally join Live Nation,» said Alejandro Soberón Kuri, President and CEO of CIE. «This is a natural evolution of our long-standing relationship and it gives us a unique opportunity to continue OCESA´s 30-year contribution to the development of the Mexican live entertainment industry. Additionally, it will help us foster CIE´s commitment to the promotion of Mexican artistic talent abroad.»

Soberón Kuri will serve as CEO and sit on the board of the newly-formed joint venture. Rapino will become Chairman of the venture’s board of directors.

Live Nation is considering various options to finance the purchase price for the acquisition, which include the issuance of equity securities subject to market conditions. LionTree Advisors served as financial advisor to Live Nation in connection with the transaction.

About Corporacion Interamericana de Entretenimiento
Corporacion Interamericana de Entretenimiento (BMV: CIE) is a prominent player in the out-of-home entertainment industry in Latin America. The Company is a promotor and producer of concerts, music festivals, theater, as well as sports, family, and cultural events. CIE operates Centro Citibanamex, a convention and conference venue in Mexico City, as well as the El Salitre Magico amusement park in Colombia. Likewise, the Company produces corporate events for the public sector. CIE promotes and markets the Formula 1 Mexican Grand Prix.

About Televisa
Televisa is a leading media company in the Spanish-speaking world, an important cable operator in Mexico and an operator of a leading direct-to-home satellite pay television system in Mexico. Televisa distributes the content it produces through several broadcast channels in Mexico and in over 70 countries through 27 pay-tv brands, television networks, cable operators and over-the-top or «OTT» services. In the United States, Televisa’s audiovisual content is distributed through Univision Communications Inc. («Univision»), a leading media company serving the Hispanic market. Univision broadcasts Televisa’s audiovisual content through multiple platforms in exchange for a royalty payment. In addition, Televisa has equity representing approximately 36% on a fully-diluted basis of the equity capital in Univision Holdings II, Inc., the controlling company of Univision. Televisa’s cable business offers integrated services, including video, high-speed data and voice services to residential and commercial customers as well as managed services to domestic and international carriers. Televisa owns a majority interest in Sky, a leading direct-to-home satellite pay television system and broadband provider in Mexico, operating also in the Dominican Republic and Central America. Televisa also has interests in magazine publishing and distribution, professional sports and live entertainment, feature-film production and distribution, and gaming.

About OCESA Entretenimiento
One of the most prominent live events businesses globally, OCESA promotes more than 3,100 events for nearly 6 million fans annually across Mexico and Colombia and has a robust business portfolio in ticketing, sponsorship, food & beverage, merchandise, and venue operation with 13 premier venues across Mexico with a collective capacity of nearly 250,000 seats. OCESA’s primary ticketing business, Ticketmaster Mexico, is a leading ticket company in Mexico.