CHARLOTTE, N.C., Sept. 11, 2021 /PRNewswire/ — The Save Our Allies(SOA) coalition, founded by Chad Robichaux of Mighty Oaks Foundation  and Sarah Verardo of The Independence Fund announced the completion of Phase 1 in its evacuation efforts in Afghanistan, where they successfully evacuated over 12,000 individuals, including Afghans, interpreters, widows, orphans, Christians, and Americans. Save Our Allies saved 8,911 from Afghanistan directly into the United Arab Emirates. Additionally, SOA assisted in manifesting and acquiring targets for the U.S. State Department that they evacuated to other countries of over 3,000 personnel, for a total of 12,000 evacuees. One evacuated family included an interpreter who served alongside Mighty Oaks Foundation Founder Chad Robichaux during his time as a Force Recon Marine. Chad had worked six years to help Aziz and his family using the SIV (Special Immigrant Visa) program. 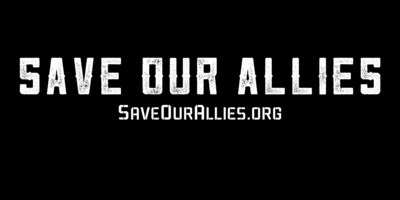 The Afghan Special Immigrant Visa (SIV) program was created to protect Afghan allies who risked their lives helping U.S. troops in Afghanistan. Despite its promise, the program has been plagued by backlogs since it launched in 2009, leaving tens of thousands of Afghans in dire need of support.

The Save our Allies Coalition members  know that the more than 800,000 brave men and women who served in Afghanistan can attribute a great deal of their success to the valuable addition the Afghan allies took to help protect and defend their country. Because of this critical assistance that was shown to our service members when they were deployed, we owe it to them to assist in their time of need.

«Our work and mission continue to honor our Allies as we move into Phase 2 of our operation,» said Sarah Verardo, CEO of The Independence Fund. «It is our job to honor our fallen service members, continue to serve our nation’s heroes, and complete the Save Our Allies mission to resettle the Allies we were able to evacuate with the respect and warm welcome they deserve. For so many of us, Afghanistan will be on our hearts and minds for all of our days.»

«Now the real work begins as we see the mission through,» said Chad Robichaux, Founder of Mighty Oaks Foundation. «These people lost everything, and our team at Save Our Allies feel a moral obligation to ensure each and every one we evacuated finds a new home, a new hope, and a new beginning through a process that treats them with dignity, love, and respect.»

«We have a moral obligation as Americans and as people of character to help those in need,» said Nick Palmisciano, CEO of Diesel Jack Media. «These people risked everything for the ideals we hold dear, and often take for granted here. Many of them saved the lives of our brothers and sisters in arms. They deserve a chance at the American Dream.»

«I’ve never seen the desperation that I witnessed in that last week of Afghanistan in my entire life,» said Tim Kennedy, President of Sheepdog Response. «I’ve been around the world many times in many combat situations and I’ve seen a lot of bad things, but never anything like that. I cannot undo what has happened in Afghanistan, or what these people have endured, but I can help them realize the wonder and opportunity that is the United States of America. Getting these people out of Afghanistan was just the first step. Now it’s time to set them up for success.»

Phase 1 efforts safely recovered 12,000 human lives and consisted of a team in the Middle East. In a matter of days, SOA was able to build a coalition of two non-profits (Mighty Oaks Foundation and the Independence Fund), partnering with other Non-Government Organizations and Chad Robichaux’s network of elite veterans to form Task Force 6:8, named from the Isaiah 6:8 scripture «Here am I, send me». The men of Task Force 6:8 included Chad Robichaux, Dan Stinson, Hunter Robichaux, Joe Robert, Nick Palmisciano, Tim Kennedy and a host of others. The boots-on-the-ground effort used both charter and UAE military aircraft as Phase One of the operation that was named Operation Chivalrous Nightafter the building their UAE partners housed them in. Simultaneously, Sarah Verardo, CEO of The Independence Fund, helped set up a JOC (Joint Operations Center) in the U.S. and recruited team members to meet in UAE/Abu Dhabi military base and place an on the ground coordinator and personal recovery team at HKIA (Hamid Karzai International Airport) to move off-site to recover and extract target packages.

Save Our Allies is now transitioning to Phase 2, Operation New Hope, the coalition’s effort to see it through, remaining committed to working with U.S. and foreign governments to ensure that each of our evacuees are treated humanely, with dignity and all the proper care to ensure a smooth transition to their now home, so that they might find a new hope and a new beginning.

To learn more about the work of the Save Our Allies coalition, click here. To read the letter SOA sent to President Biden and members of Congress, click here.

Mighty Oaks Foundation:
Mighty Oaks provides peer-to-peer resiliency and recovery programs that serve as the catalyst to assist our Nation’s Warriors dealing with challenges related to the struggles of daily military life, combat deployments and the symptoms of post-traumatic stress (PTS) offered at no cost to our Nation’s Warriors, including travel at beautiful ranches across the US.
Follow Mighty Oaks Foundation: Facebook| Twitter| Instagram

Leadership:
Chad Robichaux is a former Force Recon Marine and DoD Contractor with eight deployments to Afghanistan as part of a Joint Special Operations Command (JSOC) Task Force. After overcoming his personal battles with PTSD and nearly becoming a veteran suicide statistic, Chad founded the Mighty Oaks Foundation, a leading non-profit, serving the active duty and military veteran communities with highly successful faith-based combat trauma and resiliency programs. Having spoken to over 250,000 active-duty troops and led life-saving programs for over 4,000 active military and veterans at four Mighty Oaks Ranches around the Nation, Chad has become a go-to resource and is considered a subject matter expert on faith-based solutions to PTSD, having advised the former Presidential Administration, Congress, the VA the DoD and was appointed to serve as the Chairman of a White House Veterans Coalition.In addition to Chad’s military service, he has served our nation as a Special Agent with the US Federal Air Marshal Service and the US State Department as a Surveillance Detection Senior Program Manager. Chad is a Medal of Valor recipient for his bravery beyond the call of duty in law enforcement.

Sarah Verardo is a national advocate for wounded Veterans and their Caregivers. Her husband Michael was catastrophically wounded in Afghanistan in 2010 in two separate IED attacks that took his left leg, much of his left arm, and left him with polytraumatic conditions that have required more than one hundred surgeries and years of speech, visual, physical, and occupational therapies. Verardo advises Administration officials and members of Congress on the experiences of the families of severely wounded Veterans and has been instrumental in shaping national policy for our warfighters and their families. Regularly appearing on cable news to commentate on the sacrifice of Veterans and Military families, Verardo is a respected subject matter expert in the field. Verardo is also the author of «Hero at Home» a children’s book that celebrates the heroism of combat troops and educates young audiences on caring for the wounded heroes in their community. Sarah was selected as The Independence Fund’s first Chief Executive Officer and created the organization’s advocacy, adaptive sports, caregiver, suicide prevention, family, and SIV programs based upon her work with Active Duty troops and Veterans.

Nick Palmisciano is the CEO of Diesel Jack Media, a full-service marketing agency that specializes in helping brands to not suck at marketing.  He is best known for his first company – military apparel brand Ranger Up, and his Hollywood films Range 15 and Not a War Story. He spent the best and hardest six years of his life as an infantry officer in the United States Army. After the Army he worked in various leadership roles in a multinational Fortune 100 company, before diving full force into entrepreneurship. Nick holds an MBA from the Duke University Fuqua School of Business and a B.S. in Mechanical Engineering from the United States Military Academy at West Point.  He was awarded the Entrepreneurial Organization’s Veteran Entrepreneur of the Year Award in 2015, as well as the Bobcat, Wolf, Bear, and Webelo Badge in Cub Scouts.
The Wolf Badge was his favorite.

Tim Kennedy is a President of Sheepdog Response, with combat deployments throughout the middle east as part of the most elite counter terrorism and hostage rescue unit within the U.S. Army Green Berets. He is a former professional mixed martial arts fighter and two time title challenger. He has fought for the largest organizations in the world, which include the UFC, Strikeforce, and the WEC.

SOURCE Save Our Allies