Skip leans deeper into Canadian roots through its support of hockey at all levels across Canada, announces new creative to support the 2021-2022 NHL season

WINNIPEG, MB, Oct. 6, 2021 /CNW/ – SkipTheDishes, Canada’s largest and most trusted food delivery network, announces renewed multi-year partnerships with six Canadian NHL teams. Skip is proud to bolster its support of sports across Canada, reaching millions of fans across the country in its role as the Official Food Delivery App of the NHL® and the Official Food Delivery App of Hockey Canada & Team Canada and the IIHF World Junior Championship. 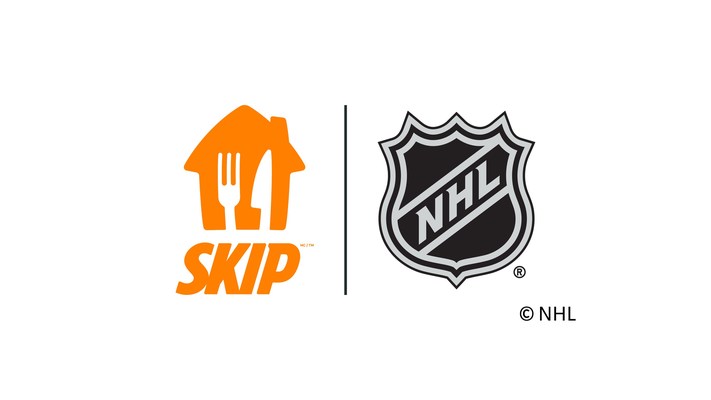 As an official partner of the NHL, Vancouver Canucks, Edmonton Oilers, Calgary Flames, Winnipeg Jets, Montreal Canadiens, and Ottawa Senators, Skip will launch a holistic campaign across broadcast (TSN/Sportsnet and RDS/TVA), supported by in-arena assets plus digital, social and hospitality activations, throughout the regular season and the Stanley Cup® Playoffs, and at NHL tentpole events as a partner of the 2022 Tim Hortons NHL Heritage Classic™.

"Skip’s integration with the NHL across Canada has become a much-anticipated partnership for fans and we are delighted to work together to build impactful fan programs for the 2021–22 season," said Kyle McMann, NHL Senior Vice President, North American Business Development & Global Partnerships. "This collaboration will help ensure our organizations remain at the forefront of connecting millions of passionate Canadians through this innovative partnership of sport and food."

Skip tapped top Canadian comedic directing duo the Perlorian Brothers to bring the brand to life with all new creative spots. Launching with the start of the 2021–2022 season on October 12, they will explore the pre-game rituals leading up to puck drop. Along with a full refresh on in-game messaging during Sportsnet segments, Skip’s unique QR code, which debuted during the 2021 Stanley Cup® Playoffs, will again appear in broadcast to make game time ordering even easier, ensuring Canadians watching from home don’t miss a second of the action when hunger hits.

"As a proud Canadian brand, hockey continues to be a platform for Skip to create something special for Canadians," says Cheryl Radisa, Vice President, Marketing, SkipTheDishes. "In our first full season together as the Official Food Delivery App of the NHL®, we look forward to creating an even deeper connection with fans across the country, being there for all their game time moments whether watching at home or in-person."

SkipTheDishes is part of JustEatTakeaway.com, a leading global online food delivery marketplace. SkipTheDishes connects millions of customers with over 40,000 Restaurant Partners in Canada.

The National Hockey League (NHL), founded in 1917, consists of 32 Member Clubs. Each team roster reflects the League’s international makeup with players from more than 20 countries represented, all vying for the most cherished and historic trophy in professional sports – the Stanley Cup. Every year, the NHL entertains more than 670 million fans in-arena and through its partners on national television and radio; more than 191 million followers – league, team and player accounts combined – across Facebook, Twitter, Instagram, Snapchat, TikTok, and YouTube; and more than 100 million fans online at NHL.com. The League broadcasts games in more than 160 countries and territories through its rightsholders including ESPN, Turner Sports and NHL Network in the U.S.; Sportsnet and TVA Sports in Canada; Viaplay in the Nordic Region; Yandex in Russia; and CCTV and Tencent in China; and reaches fans worldwide with games available to stream in every country. Fans are engaged across the League’s digital assets on mobile devices via the free NHL App; across nine social media platforms; on SiriusXM NHL Network Radio; and on NHL.com, available in nine languages and featuring unprecedented access to player and team statistics as well as every regular-season and playoff game box score dating back to the League’s inception, powered by SAP. NHL Original Productions and NHL Studios produce compelling original programming featuring unprecedented access to players, coaches and League and team personnel for distribution across the NHL’s social and digital platforms.

The NHL is committed to building healthy and vibrant communities using the sport of hockey to celebrate fans of every race, color, religion, national origin, gender identity, age, sexual orientation, and socio-economic status. The NHL’s Hockey Is For Everyone initiative reinforces that the official policy of the sport is one of inclusion on the ice, in locker rooms, boardrooms and stands. The NHL is expanding access and opportunity for people of all backgrounds and abilities to play hockey, fostering more inclusive environments and growing the game through a greater diversity of participants. To date, the NHL has invested more than $100 million in youth hockey and grassroots programs, with a commitment to invest an additional $5 million for diversity and inclusion programs over the next year.