CULVER CITY, Calif., Aug. 12, 2021 /PRNewswire/ — Sony Pictures’ AFFIRM Films and the Kendrick Brothers, in association with the Fatherhood CoMission, reveal the trailer for the filmmakers’ first documentary, Kendrick Brothers’ SHOW ME THE FATHER, coming to theaters September 10, 2021. The trailer features clips and quotes from each of the five key stories interwoven together in the movie. 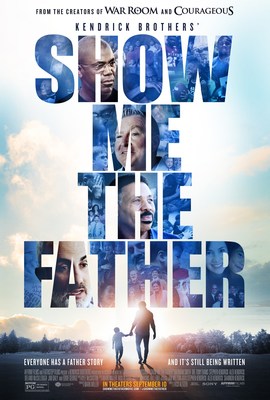 «This documentary illustrates the Biblical principle of a father’s role to transfer the character, person and purposes of God through him, to his offspring,» said Dr. Tony Evans, Senior Pastor of Oak Cliff Bible Fellowship. «As men, we need to be modeling what our Heavenly Father is like. I look forward to this documentary changing society’s perspective of what fatherhood should be.»

«The words that a father speaks over his children are so crucial,» said filmmaker Alex Kendrick. «Children remember everything you say. That’s why the characteristics of love, patience, kindness, goodness and faithfulness that are present in God the Father are so important to impart to your children. My brothers and I are grateful for the impact our father had on our lives and there is no way that we could have told the stories we’ve told in the manner we did without our father’s influence.»

SYNOPSIS: Everyone has a unique father story. Whether positive or painful, it’s always personal and can deeply affect the core of our identity and direction of our lives. The Kendrick Brothers’ SHOW ME THE FATHER is the first documentary film from the creators of WAR ROOM, OVERCOMER, FIREPROOF, and COURAGEOUS. Featuring a variety of amazing, true stories, this captivating movie takes audiences of all ages on an inspiring and emotional cinematic journey. Providing a fresh perspective on the roles of fathers in today’s society, SHOW ME THE FATHER invites you to think differently about how you view your earthly father and also how you personally relate to God. Opening in theaters September 10, 2021.

Watch the trailer for SHOW ME THE FATHER here.

«I was honored the Kendrick Brothers included my story of being fatherless in their film,» said Focus on the Family President Jim Daly. «They’ve produced a compelling and moving documentary that points all of us to our Heavenly Father, who promises to meet and minister to us wherever we are on our life’s journey.»

The film is produced by Mark Miller and directed by Rick Altizer. SHOW ME THE FATHER follows the Kendricks’ previous features OVERCOMER, FIREPROOF, COURAGEOUS, FACING THE GIANTS, and the #1 box-office hit, WAR ROOM. Also from the Kendrick Brothers this fall, COURAGEOUS LEGACY debuts with a special 10-year anniversary limited release in theaters beginning October 15, 2021.

About AFFIRM Films
AFFIRM Films, launched in 2007, is an industry leader in faith-based/inspirational film with worldwide box office of over $650 million including such hits as SOUL SURFER, WAR ROOM, RISEN, HEAVEN IS FOR REAL, MIRACLES FROM HEAVEN, OVERCOMER and most recently A BEAUTIFUL DAY IN THE NEIGHBORHOOD in partnership with TriStar Pictures. AFFIRM produces, acquires and markets content that inspires, uplifts and entertains audiences around the world focusing on family and faith. Sony Pictures Entertainment is a subsidiary of Tokyo-based Sony Corporation.

Register to get all the latest news from AFFIRM Films at www.affirmfilmsupdates.com and follow AFFIRM Films on social media at @AFFIRMFilms.

About Kendrick Brothers Productions
Kendrick Brothers Productions is led by brothers Alex, Stephen and Shannon Kendrick and exists to glorify God by inspiring audiences of all ages with resources that positively impact their faith, families, and personal relationships. By blending entertaining stories with doctrinal integrity, the Kendricks have produced theatrical films, books, and group curriculum with a growing international reach.

2021 marks the 10th Anniversary Legacy Edition release of their hit film COURAGEOUS and also the debut of the filmmakers’ first, feature-length documentary, SHOW ME THE FATHER.

The Kendricks began their journey in 2003 with the production of the micro-budget film, FLYWHEEL, which has now sold over a million copies in DVD format and paved the way for the following theatrical releases: FACING THE GIANTS, FIREPROOF (#1 Independent Movie of 2008), WAR ROOM (#1 at the US box office) and OVERCOMER (#1 Inspirational movie of 2019). The Kendrick Brothers’ body of work has been credited with helping create the subcategory known as faith-based films. They are currently in production on their 7th feature film.