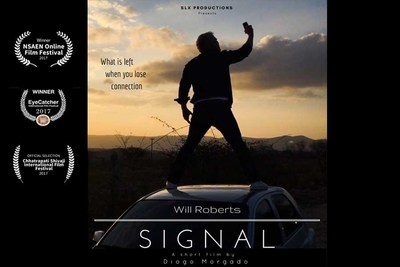 The Will Roberts-NewsBlaze partnership on writing, editing and video production began in 2007 and continues strong today.

«Will Roberts is a long-time partner to NewsBlaze, a living tour de force whose ingenuity and ability to see the future helps drive projects forward from one success to another,» said Alan Gray, NewsBlaze CEO. «We knew back in 2007 that we were great partners for each other, and we are over the moon to see him excelling in film.»

Signal the film run time is 11:30 and was shot in Pernaboco Brazil. The main actor Will Roberts won Best Actor for this Short Film from the Golden state Film Festival @goldenstatefilmfestival in Los Angeles as well. Signal was created, shot, and produced by Diogo Morgado @diogomorgado on an iPhone 5s on a day off in Pernaboco Brazil while shooting the Netflix film, The Killer.

Originally Will was slated to receive this Best Actor award last year, however, because of Covid the festival did not happen in person and was moved to in-person in 2021 at the X World Short Film Festival in Las Vegas.

«It was great to see people back in theaters and the energy in the theater was high that night as awards were given out.» Will Roberts said.

NewsBlaze and Will Roberts are working on a new promotional project that involves writing, editing, interviews, news features, video production, voiceover, and social and organic promotion for selected public relation firms with clients in business or entertainment. Contact NewsBlaze at the website, by phone or email to learn more.

About Will Roberts the Actor
Will Roberts has been an SAG actor for 37 years. As a professional cowboy, Will is a Guinness World Record Gun Spinner, a whip artist and trick roping expert, with a variety of other talents, including clowning and dancing. Will was an on-air FOX Kids host for 7 years in Northern California and performed on the Las Vegas strip with the renowned Cirque du Soleil in «Viva Elvis.» Most recently Will appeared on the Ellen show as the dancing Dad.

Will’s recent TV and films include «Lucifer,» «Amazon,» «The West and the Ruthless,» Disney’s «ABCD2» shot in India, and «Ibot,» a feature film in distribution in China.

Will Roberts is a skilled voice talent, providing the high-quality voice-over for online and radio commercials. Connect with Will on twitter https://Twitter.com/WRobertsActor or Instagram https://Instagram.com/WillRobertsOfficial

Will Roberts can also be found at his websites.
https://HonestHuckster.com – Magician
https://TrickRopers.com – Cowboy
https://ActorWillRoberts.com – Actor

About NewsBlaze
NewsBlaze was founded in 2004 as an independent online newspaper and information portal, forming relationships with other publishers and wire services. NewsBlaze covers broad topics of interest to readers worldwide, which helps build a loyal, global following of readers, especially in Australia, North America and Europe.